Wind Loads in the Real World

We've all seen the damage done by hurricanes, tropical storms, and tornadoes. Building owners, architects, builders, code officials and insurers are all aware of the need to build strong, wind resistant structures.

With a 25 year track record of successful installations that have endured multiple hurricanes (including a category 5 hurricane) with no damage other than a few minor scratches from flying debris, StonePly is no stranger to high winds.

Per the International Building Code wind speed map, the highest listed wind speed for all 50 states in the USA is 150 mph. For special applications, StonePly components have been designed and tested for wind speeds in excess of 300 mph.

The main constraint for wind load resistance in StonePly cladding panels is usually the attachment to the structure. Attachment options include threaded inserts, Z-clips, screws, adhesives, and rivets. StonePly and their engineers will be happy to work with you to design the connection system that meets your requirements. 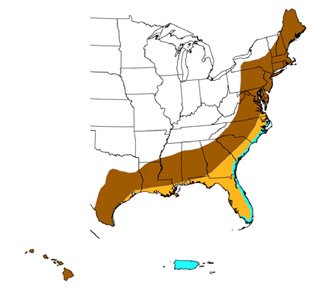 The number of hurricanes expected to occur during a 100-year period based on historical data.

Damage in a hurricane is often caused by flying debris. For this reason, Miami Dade and several other agencies require impact testing of certain architectural components. The most severe of these tests is the large missile test: a weighted 2x4 is fired at the test subject.

Normal stone panels typically fail the large missile test. In a hurricane, this means that the stone shatters and the fragments fall, potentially dealing more damage to the structure on the way down or becoming high-speed projectiles themselves. There is also the damage invited by the now-exposed wall to materials behind the stone cladding.

The StonePly Solution to High Wind

StonePly, unlike solid stone, stands up to the large missile impact test. With an impact resistance that is up to 60 times greater than 1.5" granites, it holds up to flying debris and protects the building that it is cladding. During the large missile test, the 2" × 4" wood stud bounces off of the StonePly panel. StonePly derives its strength from its aluminum honeycomb backing adhered with aviation epoxy. Both of these components are used on aircraft whose surfaces experience wind speeds of thousands of miles per hour for thousands of hours. 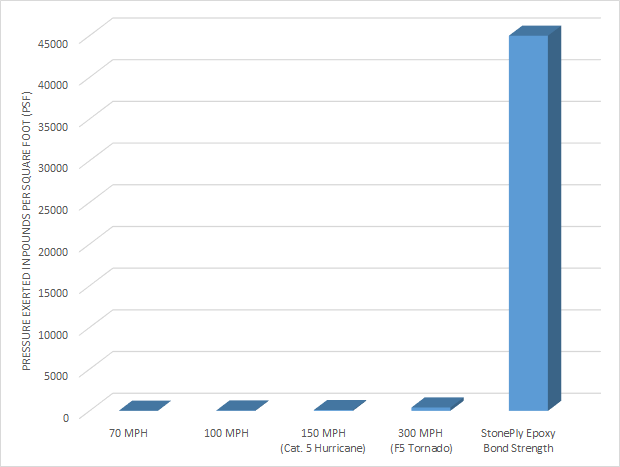 StonePly has proven itself, both in the testing lab missile tests, and in real world Category 5 hurricanes. The International Building Code (IBC) has now been adopted in most areas of the United States. It sets up certain standards of wind resistance. All US building codes use the engineering standard published by the American Society of Civil Engineers, ASCE7 "Minimum Design Loads for Buildings and Other Structures" as the basis for wind load design and calculations.

Both the International Building Code and ASCE7 include a wind speed map. The wind speed map is based on data compiled by the National Weather Service (NWS) from information gathered at airfields around the United States. 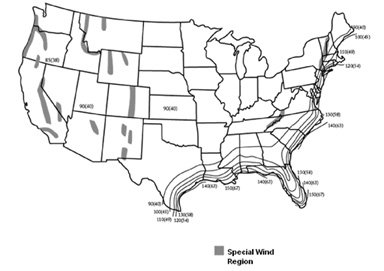 A model building code developed by the International Code Council. Most of the U.S. has adopted this building code (some areas with minor, locally adopted variations). The wind load provisions in this code specifically calls out the use of ASCE7 in wind load calculations.

The American Society of Civil Engineers design standard: "Minimum Design Loads for Buildings and Other Structures". Section 6 deals with wind loads. ASCE7 is the basis for wind load calculations used by all major building codes. The wind loads calculated by ASCE7 are then used as the basis for the design of the StonePly connection details.

The National Weather Service measurement of wind speed. The data for this measurement is taken from measuring devices set 33' above the ground at airfields across the USA. This data is then compiled into wind maps found in both ASCE7 and the International Building Code. The wind speed maps are based on a yearly 2% probability of occurrence (50-year average peak wind).

The margin of safety added to the calculations when designing for cladding panels or elements.

MRH is the height above grade level of the midpoint of a roof. Mean Roof Height is used as part of design pressure calculations in both ASCE7 and the International Building Code, and is calculated by averaging the roof eave and ridge heights.

The actual measured speed of airflow, wind velocity is usually expressed in MPH.

Pressures placed on a structure or component during a severe weather event. Wind Load is both a positive and negative force depending on the direction of the wind in relation to the orientation of the structure. Stone cladding and stone panel components should be designed and anchored to withstand both the positive pressure, and the suction.